When you go to the grocery store, you can look at an apple and know if it was grown in Chile, Washington or somewhere closer to you by a quick glance at its sticker. But consumers have largely been in the dark when it comes to energy, and how far it has traveled to reach them.

A study published today in the journal Frontiers in Sustainability by the University of California, Davis, sheds light on the lengths alternative energy providers go to bring electrical power to customers.

Consuming electricity closer to its source can reduce greenhouse gases lost in the transport of electrons across the transmission and distribution grid. This can help increase efficiencies and create more self-sustaining, equitable communities. Similar goals are often shared by farm-to-table supporters.

“This study provides a quantitative foundation for a local energy movement, akin to the local food movement,” said co-leading author Rebecca R. Hernandez, an assistant professor in the UC Davis Department of Land, Air and Water Resources and a founding director of the Wild Energy Initiative in the John Muir Institute of the Environment, and Energy and Efficiency Institute.

The study compared three types of energy providers in California — community choice aggregations, or CCAs; cooperatives; and publicly owned utilities — to learn the distance purchased-energy sources travel to support their consumers, and the makeup of their energy resource portfolio, in 2017. Investor-owned utilities were excluded from the study.

Madison Hoffacker, a master’s student in the UC Davis Energy Graduate Group at the time the study was conducted, designed and hand-curated the study’s large, spatial dataset. She found that CCAs purchased more than 2.5 times as much renewable energy as other providers. Renewables comprised nearly half of their energy portfolios. However, CCAs also went 2.5 times farther to source that energy.

Hoffacker notes that CCAs are young, with beginnings around 2010, and it takes time to build energy portfolios. She hopes the research will help shape future goals of energy providers and raise awareness among customers and utilities alike of the need to look for both renewable and local sources.

“My study was trying to find a way to ensure accountability for different decision makers who have an influence over not only what type of energy is procured but also where we’re sourcing that energy from,” Hoffaker said.

The study found that only about 20 percent of purchased energy among providers was local. The remaining 80 percent is what Hoffacker terms “outsited” — energy generated from outside the provider’s jurisdictional footprint. In fact, 42 percent was drawn from out of state. 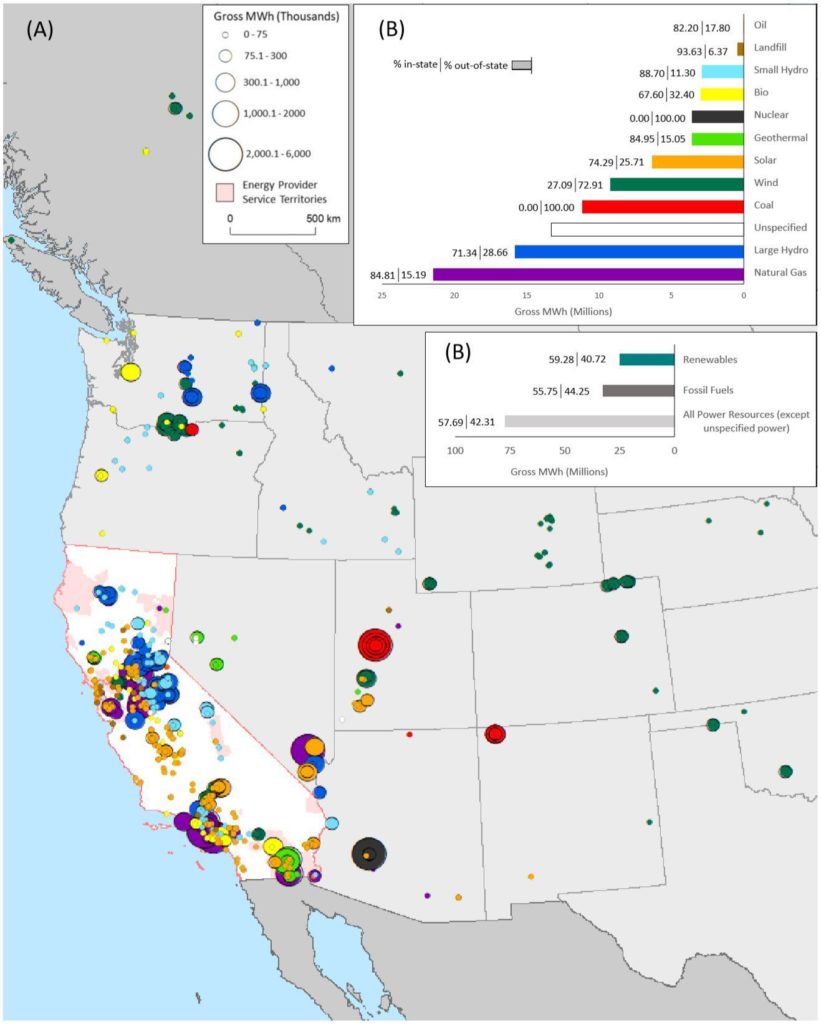 On average, purchased resources in California came from 270 miles away — as far north as Canada and as far east as Oklahoma. Further, 100 percent of coal and nuclear energy purchased by these providers was sourced from out of state.

“As we race toward a rapid energy transition to renewables, it can be deceptively attractive to impose large-scale energy infrastructure upon poorer, often rural communities that are far away,” Hernandez said. “Such communities are often disenfranchised from such development decisions or lack the socio-economic resources to voice how that infrastructure may impact their viewsheds, natural resources, and livelihoods — and we have seen this happen here in the U.S.

“By siting energy infrastructure as near as possible to those who directly benefit from it, risks and liabilities associated with environmental justice are often reduced.”

While conducting the study, Hoffacker noticed several parallels between consumers’ increased interest in local, decentralized energy and the local food movement. One movement fuels interest in sourcing food from our own backyard, farmers markets, cooperatives and community supported agriculture subscriptions. The other features people installing rooftop solar panels and battery systems, and supporting providers like cooperatives and CCAs.

“People want to provide their own energy or have choices over where their energy resources are coming from, be they renewable or local,” Hoffacker said. “There’s a lot we know about the food sector regarding standards for producing organic food or distance metrics for local foods. There’s a similar movement underway that we can apply to the energy sector, as well.”

The study was funded by UC Davis’ John Muir Institute of the Environment; Department of Land, Air and Water Resources; Agricultural Experiment Station; and by the California Energy Commission.